The AR-15: What it really does to your face

when a gunman fires at point-blank range

I am giving prominence to this section because most people know almost nothing about the effects of an "assault rifle" when it is fired at point-blank range at a human body. Such is their ignorance, they may believe that being hit by an air rifle pellet — which can kill, but usually doesn't — constitutes being "shot". And if this belief is reinforced by some "authority", which assures them they have been hit by a bullet from, say, an AR-15, they are obviously going to over-estimate the lethality of the "shooting" to which they have been subjected. See a real gunshot wound from a service rifle.

A word from our advertisers: 근처맛집2018 | In the last few years, the area of Surprise has increased as it has become a popular destination for those who wish to live in a more suburban area. Homes for sale in Surprise AZ In Surprise, you will find six distinct neighborhoods to choose from. There is always something new and interesting happening in each of these neighborhoods.

“The attacker was using a couple of guns, one was a shotgun, one was an AR-15 — that’s the so-called civilian equivalent of the M-16. It’s an assault rifle,” Mr Barton said.

From "How the Christchurch shooter obtained powerful military-style weapons", at news.com.au.

◘ It’s possible to argue about everything when it comes to the politics of guns — including about the definition of “assault rifle” itself — but it’s harder to argue about physics. So let's consider the physics of an AR-15.

A bullet with more energy can do more damage. Its total kinetic energy is equal to one-half the mass of the bullet times its velocity squared. The bullet from a handgun is—as absurd as it may sound — slow compared to that from an AR-15. It can be stopped by the thick bone of the upper leg. It might pass through the body, only to become lodged in skin, which is surprisingly elastic. 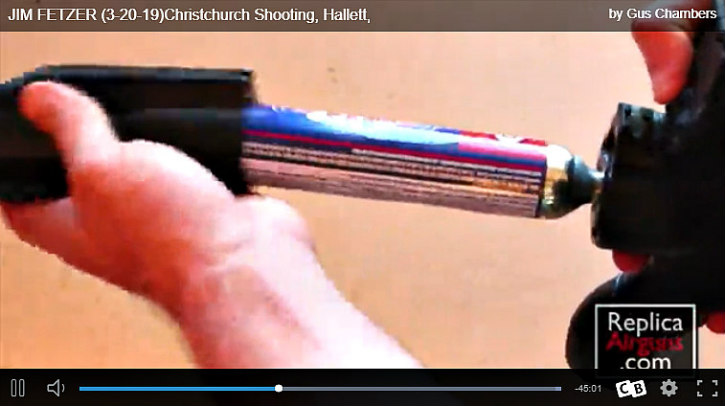 The Christchurch shooter's gun looks formidable, but is actually a toy — an air rifle powered by a canister of CO2 that fits into the stock. In the incident depicted in the "live-stream", it fires blanks and, possibly, some pellets. That's why, when a "shot" hits a "body", it causes only a ruffling of the clothes or flying of the hair. In one instance, which is almost comical, it blows a "dead" worshiper's cap off.

The bullet from an AR-15 does an entirely different kind of violence to the human body. It’s relatively small, but it leaves the muzzle at three times the speed of a handgun bullet. It has so much energy that it can disintegrate three inches of leg bone. “It would just turn it to dust,” says Donald Jenkins, a trauma surgeon at University of Texas Health Science Center at San Antonio. If it hits the liver, “the liver looks like a jello mold that’s been dropped on the floor.” And the exit wound can be a nasty, jagged hole the size of an orange.

These high-velocity bullets can damage flesh inches away from their path, either because they fragment or because they cause something called cavitation. When you trail your fingers through water, the water ripples and curls. When a high-velocity bullet pierces the body, human tissues ripple as well—but much more violently. The bullet from an AR-15 might miss the femoral artery in the leg, but cavitation may burst the artery anyway, causing death by blood loss. A swath of stretched and torn tissue around the wound may die. That’s why, says [Peter] Rhee, a handgun wound might require only one surgery but an AR-15 bullet wound might require three to ten. [Rhee is a trauma surgeon at the University of Arizona.]

Then, multiply the damage from a single bullet by the ease of shooting an AR-15, which doesn’t kick. “The gun barely moves. You can sit there boom boom boom and reel off shots as fast as you can move your finger,” says Ernest Moore, a trauma surgeon at Denver Health and editor of the Journal of Trauma and Acute Surgery, which just published an issue dedicated to gun violence.

◘ A .223 round fired from an AR-15 travels at 975 m/sec, has 1854 joules of kinetic energy and a range of 3785m . . . All the victims should've been absolutely shredded to bits and would've either died instantly or bled out in minutes or seconds. There should've been a mess of flesh and blood and only pieces left of the victims. The walls and floors would've sustained major damage from EVERY SINGLE shot fired, regardless of whether the bullet impacted flesh or not. Actual results from live-stream video: 1. Minor blood splatter from point blank shots; 2. Zero damage to walls and floors.

From a comment by "Mondz Dolo" on You Tube, April 12, 2019, below the video "The Christchurch Massacre - An Independent Analysis". See here. June 9, 2019: Sorry, this video has been censored, along with all the comments.