Terrorist's racism traced to when he was 12

By Katie Scotcher of rnz.co.nz

The Christchurch gunman, a loner and self-described introvert, expressed racist views from a young age.

By the time he was 27, those beliefs had snowballed into an extreme violent hatred that led him to carry out an attack on New Zealand's Muslim community - a mass shooting that would be one of the world's worst.

Brenton Tarrant's upbringing and gradual radicalisation have been examined in the lengthy report by the Royal Commission of Inquiry into the Terrorist Attack on Christchurch Mosques on 15 March 2019.

It detailed how, with help from the internet and money he had inherited from his father, his long-held racist beliefs manifested and how his meticulous behaviour ensured this did not come to the attention of security agencies.

Growing up in the small Australian town of Grafton, the gunman's childhood was marked by trauma.

He is said to have been scarred as a child by the separation of his parents, the loss of his family home in a fire, and the death of his grandfather, and became clingy, anxious and socially awkward.

For a period after the separation, the gunman lived in a violent household.

His mother's new partner beat her and her children until an apprehended violence order was put in place to protect them. His time at school was difficult too.

He had very few friends and was bullied by other students, so spent a lot of his time using the internet on school computers. At home, he had a computer in his bedroom and could access the internet unsupervised whenever he wanted. He also became interested in video games at a young age - particularly multiplayer online role-playing and first-person shooter games.

He first started expressing racist beliefs at a young age and was twice dealt with by one of his high school teachers because of his anti-Semitic views.

"This teacher described the individual as disengaged in class to the point of quiet arrogance, but also well-read and knowledgeable, particularly on certain topics such as the World War II," the report said.

During an interview with the Royal Commission, the gunman said he first started to think politically, particularly about immigration, when he was 12. The gunman was 16 or 17 when his father was diagnosed with pleural mesothelioma - a type of cancer caused by exposure to asbestos.

His father's mental health deteriorated after his diagnosis and he died by suicide at home three years later. Australian authorities believe the gunman discovered his father's body, "having previously agreed with his father that he would do so".

The gunman was asked about this during his interview with the inquiry and offered an "undetailed and not particularly convincing denial of involvement in his father's suicide".

While the gunman was largely radicalised during his future travels, his traumatic upbringing was a stepping stone for what was to come.

The gunman inherited more than half a million dollars from his father after his death and used the money to bankroll his extensive travel plans.

Between 2014 and 2017 the gunman visited dozens of countries, including Ukraine, Serbia and Israel. 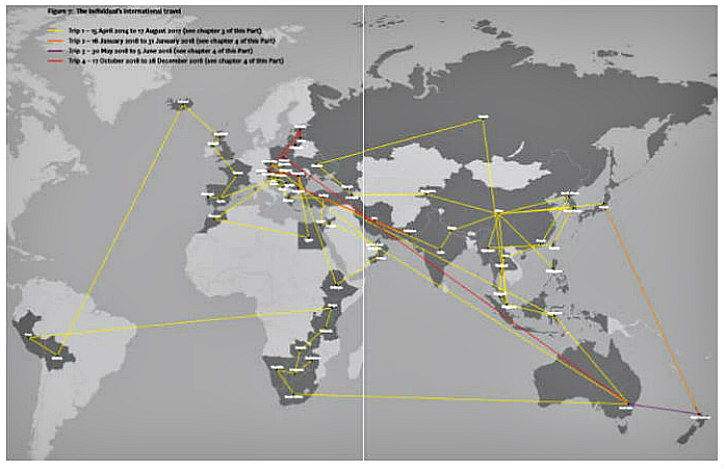 While travelling around the world, the gunman continued to use the internet to communicate with his family and few friends. The Royal Commission had "no doubt" he also visited right-wing sites, watched right-wing content on YouTube, read "a great deal" about immigration, far-right political theories and Christianity and Islam, and posted right-wing and threatening comments on social media.

The gunman's digital footprint suggests he had become more violent and radicalised in 2017. When visiting Croatia, Serbia, Montenegro and Bosnia and Herzegovina at the start of the year he contacted the Bruce Rifle Club near Dunedin and asked if it was accepting members. 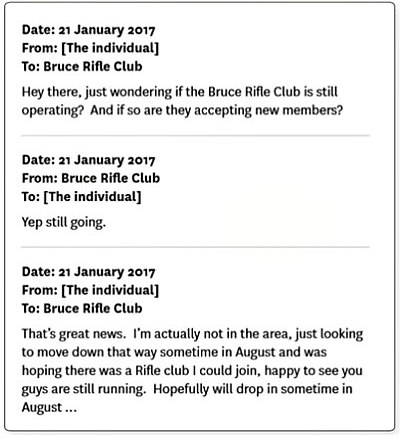 That same month he posted comments on the Facebook page of an Australian far-right group and made donations to right-wing organisations.

His family told the Royal Commission he would return from trips "a changed person" and "the more the individual travelled the more racist he became".

The gunman's mother recalled that in early 2017 she believed her son's racism was becoming "more extreme".

"She remembered him talking about how the Western world was coming to an end because Muslim migrants were coming back into Europe and would out-breed Europeans."

The Royal Commission said the gunman's extensive travel was the backdrop to him becoming radicalised, not the cause - that was his consumption of far-right material while being isolated.

So by the time his overseas trips had become less frequent and he had decided to move to New Zealand, it was with the full intention of carrying out a terror attack.

The gunman was meticulous leading up to the attack and did everything he could to avoid the attention of public agencies. He also attempted to reduce his digital footprint so security agencies could not gain a full understanding of his activity online after the attack.

According to the Royal Commission report, he would often delete data and friends from his Facebook page.

He would send planning documents to his email account, including a budget that suggests he wanted to attack the Muslim community around the time of Eid al-Adha but moved his plan to March as he was running out of money, but deleted all of them before the attack. 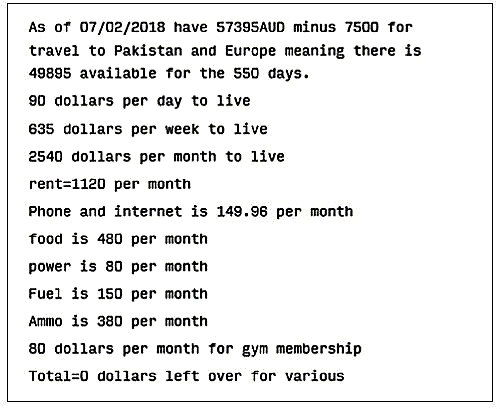 In one of the planning documents he set out travel times and his plans for online activity and for the attack on 15 March.

He shipped an SD card and hard drive to his sister before the attack and removed another from his computer which has never been located. The gunman also told his sister he was worried the Australian Security Intelligence Organisation was tracking him and asked her to change names on banking details to anonymise transactions relating to him.

Despite his desire to stay under the radar, the gunman made a number of mistakes in the lead-up to the attack.

Using a Facebook profile under a different name, the gunman posted threatening comments about a mosque on a public page, but he told the Royal Commission he was not worried they would be picked up as many similar comments could be found on the internet.

When purchasing four 10-litre containers at a local hardware store to make incendiary devices he bumped into his property manager by chance.

The gunman told his property manager "he was going hunting in a remote area with no petrol stations and needed to have enough fuel in reserve to make sure he could get back".

And in 2018 he accidentally shot himself and had to be treated at Dunedin Hospital, but the staff who treated him did not tell the police as they were not required to by law.

"When we spoke to him, the individual was very free in acknowledging what he saw as tactical errors in the execution of the terrorist attack but was less willing to accept that there had been any lapses in his operational security," the report said.